No Result
View All Result

Additional Report to the Special Rapporteur on Extrajudicial, summary or arbitrary executions in relation to his mission to Mexico, Feburary 2014 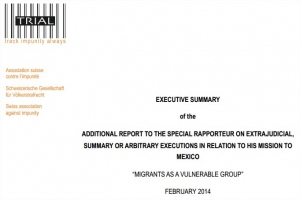 In April 2013, in view of the forthcoming mission to Mexico of the Special Rapporteur on Extrajudicial, Summary or Arbitrary Executions (“the Special Rapporteur”), the
Fundación para la Justicia y el Estado Democrático de Derecho; TRial (track Impunity Always); Casa del Migrante, Saltillo, Coahuila; Casa del Migrante Guatemala; Comité de Familiares de Migrantes Fallecidos y Desaparecidos – El Salvador (COFAMIDE); Comité de Familiares de Migrantes de El Progreso (COFAMIPRO); Foro Nacional para las Migraciones, and Pastoral para la Movilidad Humana Guatemala submitted to the Special Rapporteur a report entiled “Migrants as a Group Vulnerable to Executions”.
The Special Rapporteur carried out his mission to Mexico from 22 April to 2 May 2013 and on the latter date issued its preliminary observations and recommendations, while his integral report will be presented to the Human Rights Council in 2014. The Special Rapporteur pointed out that he would accept further contributions in the meantime.
The nine associations submitting the integral report take note with satisfaction that in his preliminary observations the Special Rapporteur referred to migrants as a group
particularly vulnerable to executions, and denounced the lack of a unified database on disappeared persons, the deficiencies of the forensic analysis and procedures followed, as well as the chronic impunity. However, persuaded that there are a number of other matters related to migrant persons victims of executions and their families that should be duly mentioned in the final report on the mission to Mexico, the associations wish to present this further document to the Special Rapporteur, containing updated information and additional data.
Read the Full Executive Summary in PDF

What does military control of policing mean for Mexico?

What does military control of policing mean for Mexico?

No Result
View All Result